Calderdale is a metropolitan district, situated in the South Pennines between Greater Manchester, and Leeds and Bradford. Within England, it is one of the larger districts by area, but one of the smallest by population, covering the towns of Brighouse, Elland, Halifax, Hebden Bridge, Sowerby Bridge and Todmorden. The headline demographic statistics are:

Calderdale has 17 wards with different geographic sizes and demographics – some wards are mainly urban, whereas others include large rural areas. Over three quarters of Calderdale residents live in urban areas. Four fifths of the Calderdale area are rural.

The range of open data available at ward level is wide, and we have used several ways to display this data, including maps, raw data, data visualisations, reports and more: 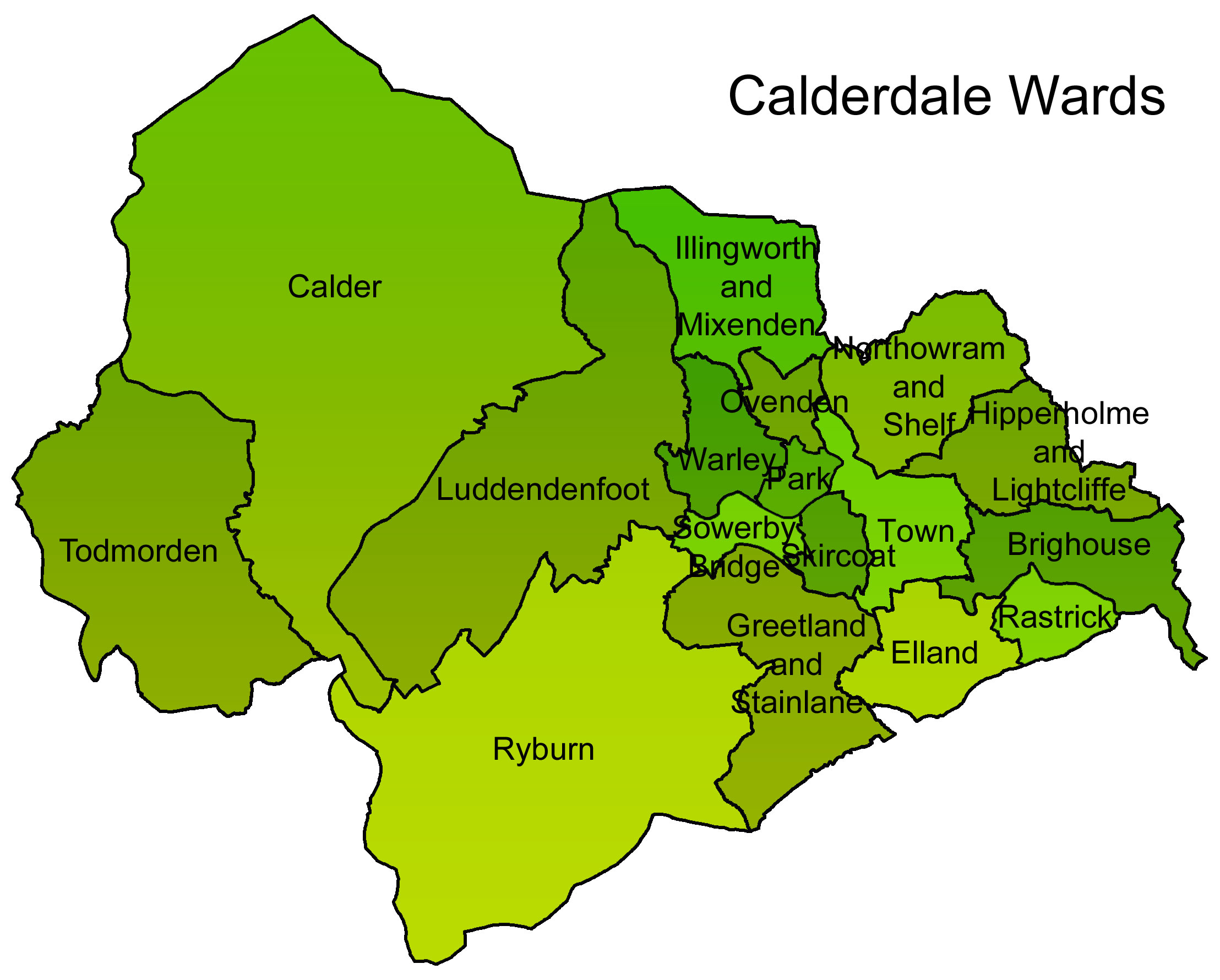 The Ward datasets act as signposts to individual datasets that have data at ward level, with links to data such as population estimates, public health, and data visualisations on specific topics. As more datasets at ward level are added to Data Works, these links will be added too. As well as links to other datasets, the Ward datasets include reports on the demographic and Index of Multiple Deprivation (IMD) data relating to each ward, maps and a brief description of the ward topography:

Calderdale district has 27 medium layer super output areas (MSOAs). MSOAs are geospatial statistical terms developed by the Office for National Statistics (ONS) for the reporting of statistics of similar population sizes.
The ONS has assigned each MSOA with a code (eg E0200224) and a label (eg Calderdale 001).
The House of Commons Library MSOA names project has given each MSOA a recognisable name that reflects any towns, villages and neighbourhoods in the area represented.
Calderdale Dataworks includes a series of demographic profiles on each MSOA in Calderdale.

The Office for National Statistics has developed a number of small area geospatial statistical terms for reporting statistics of similar population sizes. These include Medium layer super output areas (MSOAs) and Lower layer super output areas (LSOAs). MSOAs and LSOAs do not fit exactly into ward boundaries, The Office for National Statistics (ONS) have defined a best fit for each MSOA and LSOA. For further details, plus the ONS reference E code for wards, MSOAs and LSOAs, see: Calderdale MSOAs, LSOAs, and COAs by Postcode. These are used in census and other statistical data.

Some of the data relating to Calderdale schools is available at ward level. This includes data from the School census, and from data collections on attainment at different stages.

You can access these datasets via Schools data at ward level.

Sometimes it is easier to provide headline data as a visualisation, rather than just black and white numbers. We are building up a series of data visualisations that provide graphical representations of headline data on various subjects. Behind the visualisations, there is also the data used, plus additional relevant data, in a spreadsheet form. Where suitable, we have used RAG rating (red, amber and green) to provide a comparison between the different wards (or Medium super output area) and against Calderdale as a whole:

Calderdale dashboards of Ward and LSOA* data about poverty and deprivation

We have two dashboards that have information on different aspects of poverty and deprivation at ward and LSOA geographic levels:

*LSOA is short for Lower layer super output area and is a geospatial statistical term developed by the Office for National Statistics for the reporting of statistics of similar population sizes.